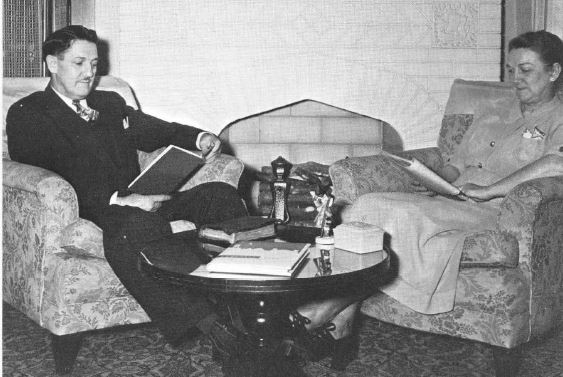 For 24 years, Dr. Barney K Baker, 64, had taught on the beautiful “campus of the thousand oaks” at Peru State Teachers College. ‘Yesterday the new college catalog came out. it revealed publicly for the first time what Dr. Baker had Known since last fail—that he was being dropped in a reorganization of the school’s department of education. The catalog, said County Attorney Fred C. Klechel, may have been the trigger that sent the professor walking wordlessly into the offices of the college president and head of the education department to kill them at their desks. Slain were Dr. William L. Nicholas, 48, president of the college since 1948, and Dr. Paul A, Maxwell head of the education department head and Dr. Baker’s immediate superior, Less than an hour later, Baker’s body was found In the living room of his home at the edge of the campus. Neatly laid out were his keys, with pieces of paper to identify them, and a typewritten note with Instructions for disposal of the body, Tacked to the front doorbell Was another note: “Tell Prof, (C. A.) Huck(mathematics teacher at the college) to take charge.” Scribbled at the bottom of the typewritten note was the apparent tipoff to the motive: “Willie (the college president) tried to fire the wrong person.” Klechel called it “obviously a double murder and suicide” and said there would be no Inquest. He said the slayings were “pre- meditated” and Dr. Baker apparently prepared his notes In advance of the slayings. Lending credence to the premeditation theory was the professor’s behavior just before the shootings. Waiting to see Dr. Nicholas, he traded small talk with two representatives of an Omaha typewriter company, also waiting. There wns no sign of fury. Mary Louise Smith, Dr. Maxwell’s secretary, said she looked up as Dr. Baker entered. “I asked if there was anything I could do for him,” she said. “I was too late. Dr. Maxwell was sitting at his desk reading. He did not see who came In. Dr. Baker had the gun at his head as I spoke. He didn’t say anything. I think there were two or three shots. “Dr. Baker just walked across the hall to his own office, put on his hat and coat and left. I ran out screaming.” Classes halted abruptly at the school, a state owned institution with about 400 students In a town of about 1000 persons. They were resumed today but the week’s extra curricular activities — a track meet, a senior’s violin recital, a career conference for prospective teachers and a meeting ot the southeast Nebraska Schoolman’s association—were called off. Dean R. A. Qelle was named acting president.